Headwaters disturbances can produce impacts, notably the availability and delivery of sediment, which may be propagated downstream to produce regional‐scale impacts. Sediment is the primary mode of transport for a wide range of nutrients and contaminants of concern. Thus, the distribution of sediment is linked to the source, transport, fate, and effect of these pollutants in aquatic systems.
Research has provided information regarding 1) the downstream (regional) effects of wildfire on flow and water quality, 2) transport properties of fire modified sediment, and 3) identification of the upstream sources of downstream sediment and associated contaminants (fingerprinting).

Wildfire modified sediment has very different transport properties than sediment from unburned streams. A series of experiments were conducted in a laboratory flume to determine the effect of wildfire on sediment transport properties. Sediment was collected from burned and unburned streams. Wildfire changed the properties of sediment (lower settling velocities and higher porosities ) in wildfire impacted streams such that if they become suspended they will remain in the water column for longer periods and be transported for longer distances downstream compared to sediment from unburned watersheds.

Higher stream flow is required to erode wildfire impacted sediment into the water column than in unburned streams, but more sediment is eroded from burned streams at higher streamflows. This was because sediment from burned streams had greater biological activity which resulted in deep and more widespread biofilm formation along burned stream beds compared to unburned stream beds. Biofilms hold sediments together, stabilizing stream beds. However, at higher stream flows (during snow melt, stormflow events), erosion depths were 25 to 100 times greater in sediment deposits of fire impacted streams, eroding more sediment. Similar work is being conducted in the Elbow River to document intrusion fine sediments into riverbed to predict the long-term storage and periodic transport of these sediments downstream into the Glenmore reservoir in Calgary.

Wildfire changed the nutrient and contaminant characteristics of sediment. Burned sediment was enriched in nutrients, organics, and a range of metals. The most biologically active form of particulate phosphorus (NAIP) that strongly influences biological activity in streams was higher in burned sediments and this trend has persisted for 10 years after the burn. Trace metals were elevated and show an increasing concentration downstream of the burn. However, laboratory studies show sediment associated metal toxicity and bioaccumulation of toxic compounds into insects are comparatively low. Due to the properties of wildfire affected sediment, contaminants may be transported long distances, producing a long legacy of wildfire effects.

Most sediment from the burn is or will be deposited in the reservoir. Sediment source tracing shows that >80% of the basin-scale sediment delivered from the Crowsnest River to the Oldman Reservoir was produced from ~14% of the landscape which was primarily burned by the Lost Creek fire. Flow and sediment transport models (US Army Corps of Engineers RMA2 and RMA4, MOBED, RIVFLOC) demonstrate that most of the fine sediment generated from burned watersheds was transported directly into the Oldman Reservoir. Long term water quality impacts in the reservoir are likely.

Cumulative effects on river flow and water quality in the Elbow River basin is being evaluated in collaboration with the City of Calgary. This is a historical analysis of ~13-23 years of water quality and associated hydrologic data for several sub-watersheds within the Elbow River basin (1235 km2) which originates in the eastern slopes of the Rocky Mountains in Alberta and represents ~40% of the water supply to the City of Calgary, the third largest municipality in Canada (1.1-million residents). This unique data set, which was primarily made possible due to the efforts of Jamie Dixon (City of Calgary), is being explored for spatial and temporal trends as related to overlapping pressures from a gradient of increasing impacts from the Rocky Mountain headwaters to the City of Calgary. 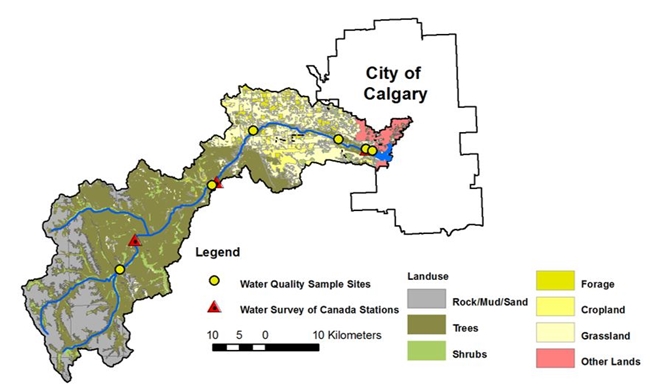